Home > Practical Applications > Body Language, Office Politics and Getting Ahead

Body Language, Office Politics and Getting Ahead 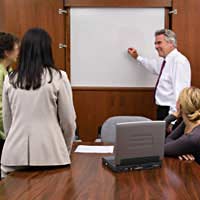 Office politics exist in practically every business environment, no matter how much an organisation tries to avoid it. The reality is that anytime you have people working with and around each other, there will be personal and professional politics. Period.

Body language is an integral part of office politics, both as a contributor and an inhibitor. In other words, body language can encourage and prolong political issues or it can discourage and end them.

Those who actively play the political game at work are also those who most actively use their body language in the process. Some of their actions may be unconscious, but it’s very likely most of them are quite deliberate. Why? Because these people understand and apply their knowledge of body language and non-verbal communication to further their own purposes.

For instance, let’s say a new sales manager comes into the office. The person who actively uses body language for office politics will display behaviours such as:

Another common occurrence is when two co-workers have a conflict or dislike each other in some way. In this situation, one or both of them may display behaviours such as:

You can see in all of these examples how body language and non-verbal behaviours can be powerful tools (or weapons, depending on your point of view) in office politics.

Those who strive to discourage or diffuse office politics may also use body language actively and deliberately. Why? Because body language is an excellent way to communicate disapproval and displeasure. It can send a message to another person without having to say anything directly or creating an uncomfortable confrontation.

For instance, let’s go back to that new sales manager in the office. Your co-worker is actively engaged in office politics, trying to gain favour with the new manager. You disapprove of such behaviour and want to be clear about that disapproval. You might display behaviours such as:

Sometimes politics and people become so intense that you can’t help but speak up. In this kind of situation, it is best to speak directly, stick to the facts, and then resume your own normal activities outside of the realm of politics.

Do You Have Other Options?

Where office politics are concerned, you have two basic choices. You can continue being part of the organisation, choosing to either prolong or discourage such issues. Or, you can choose to leave the organisation and go elsewhere.

Nobody can tell you which choice is best for you, and many times, it takes a while before the right choice becomes clear to you. Regardless of your current situation or your feelings about any politics going on, stay aware of body language and the power of non-verbal communications. Your knowledge and understanding of this area will serve you well as you consider whatever actions you might take.