What Do Dilated Pupils Mean? 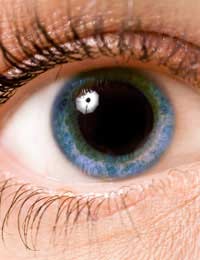 It is said that the eyes are the windows to the soul, but is it true? Could the eyes really be a portal that reveals true feelings about another? When attracted to another, there are some things that can be controlled, but pupil dilation is not one of them.

Pupil dilation can occur during many different settings. When you enter a dark cinema, your pupils will automatically dilate to let more light in. Some drugs will cause pupil dilation as well.

Another thing that causes pupil dilation is physical or psychological pleasure. When someone finds another person or thing attractive, the pupils dilate. In turn, that dilation is often found attractive by others. This is sometimes referred to as 'bedroom eyes' because of its sexual connotation. Conversely, if totally turned off by a person, the pupils may slightly contract. We may subconsciously use these pupil measurements to judge whether we like someone else or not. 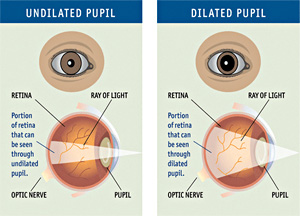 The study of pupil size as an indicator of emotion is known as pupillometrics. It was Eckhard Hess, a University of Chicago biopsychologist, who first used this term back in 1975. Hess has said he became interested in the study of pupils and dilation one night while in bed. He was looking through a book of 'strikingly beautiful' animal photos. His wife noted how big his pupils were and commented the light must be low, but Hess assured her there was plenty of light.

The next day, he went to his lab and tested assistant James Polt with several photos of landscapes and one of a pin-up girl. Hess held the photos up to his head so he couldn’t see them, but noted that Polt’s pupils dilated when he saw the photo of the pin-up. The two embarked on their research on the subject after that.

In one of the studies they conducted, they showed men two sets of photographs of women.

The men preferred the enlarged pupil

Results showed that the men preferred the photos of the women with the enlarged pupil, even though the men could not explain why those were their favourites. When the test was performed on a group of women, the results were the same.

Hess, Seltzer, and Shlien later performed a similar study on homosexual men. When showed photos of men, their pupils dilated more than when they were shown pictures of women. Some, however, argue with Hess’s claim that when an unpleasant stimulus is presented, the pupils of the subjects constrict.

You cannot control pupil dilation, but when in a romantic setting, the mood can definitely be set for love. A reduction of light causes the pupils to dilate. That is why when people think of romantic restaurants, they usually think of ones with soft light and candles.

While it is likely that pupil dilation is a sign of sexual interest, it is not true 100% of the time. Dilated pupils can also happen when:So the dilation doesn’t always mean sexual attraction.

So, we've seen that dilation of the pupils could be an indication of attraction but not always. What other signs might we look for to glean an idea of what someone is thinking or feeling? Read more about what the eyes tell us here.

If you are interested in the subject of pupil dilation and sexual atraction you might also like to take a look at Decoding Body Language in Intimate Relationships or our Questionnaire - How To Tell If Someone Likes You.