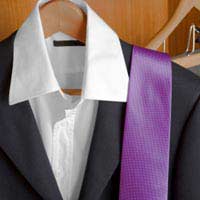 When people think of body language, they often think of subliminal signs such as crossed arms, dilated pupils, and fake smiles. But, the type of clothing a person wears can also serve as a form of body language. People often use clothing to signify their age, gender, political views, and economic class.

Have you ever judged a person based solely on their clothing? While you may think you haven’t, you probably have. Before you even hear them speak or know anything about them, you probably make certain assumptions about a person based on their clothing. Often, we expect certain people to dress a certain way before we learn anything about their credentials.

If you have ever gone on a job interview, you have probably put much thought into what you wore. Most people try to pick out one of their nicest outfits to wear, so they make a good first impression before the employer ever asks them any questions. First impressions are very important and clothing is one of the biggest factors in first impressions.

Assumptions Based on Clothing

If you went to your doctor’s office and he or she was dressed in a dirty lab coat, you might immediately think about switching doctors. We assign certain expectations to certain occupations. While you expect your doctor to be cleanly and neatly dressed, if you saw a construction worker or painter who had on clean clothing, you might tend to think he or she didn’t do much work because we expect them to be dirty since it is a dirty occupation.

Politicians can wear clothing to their advantage. If they want to impress, you may see them in a suit and tie or dress. But, if they want to give the public the impression that they identify with them, they may wear jeans and a shirt.

Certain types of clothing carry certain assumptions. For example, some people like to wear cultural clothing. If you see a woman wearing a sari, you automatically make certain assumptions about her. You may assume she is Indian and Hindu based merely on her clothing, although she may be neither.

Teenagers embrace clothing as a form of non-verbal communication. Teenagers like to dress differently to exert their independence yet at the same time, they may dress alike. Prior to the 1950s, teens and adolescence often dressed as little adults. But, that changed when teens of the ‘50s started wearing jeans, t-shirts, and poodle skirts to show adults they were rebelling against the traditional style of dress. Boys who wore jeans and t-shirts may have upon first sight been labelled as rebels. Teens who wore tie-dye during the ‘60s were automatically believed to be flower children, regardless of their political and social views. Teens like to dress differently from their elders to establish their independence and rebel against authority. By wearing clothing different from adults, many times they are trying to express that they have different attitudes about politics, society, and culture.

Remember when dressing that clothing may be the first impression of you that someone gets, whether it is accurate or not.

Body Language of an Abuser
Share Your Story, Join the Discussion or Seek Advice..
I am part of a group that stands before a worshiping congregation on Sunday mornings. We lead the congregation in singing and teaching. The congregation is mostly dressed in casual clothes. We are motivated not only to communicate to the regular attenders but to also make a good impression to guests. What advice do you have for the kind of clothing the team of men and women should wear? Thank you.
JGN - 19-Nov-18 @ 10:35 PM
Title:
(never shown)
Firstname:
(never shown)
Surname:
(never shown)
Email:
(never shown)
Nickname:
(shown)
Comment:
Validate: