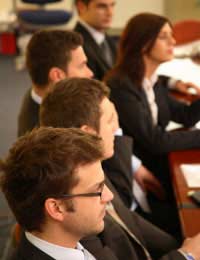 The study of body language looks at both specific body language movements as well as how both the sender and the receiver interpret those movements. Interpreting body language is critical to fully understanding communication but interpretation is tremendously subjective depending on situation, culture, and other circumstances.

Interpretations of a single body language message may vary greatly depending on both the situation and the person doing the interpreting. Whether you are at work, at home, at a restaurant, in a car, etc., any given non-verbal message will have multiple, often wildly different, meanings.

Let’s look at one simple action – a hug between two people – and how its meaning varies in different situations;

Some of the greatest differences in body language interpretation occur between different cultures. These variations can range from what is considered appropriate in formal versus informal situations, to professional versus personal situations, to specific symbolic meanings.

For instance, in cultures where body language is typically quite expressive (Italy, Latin America, Spain) a hug or a kiss on the cheek is often interpreted as nothing more than a common greeting. However, in cultures where body language is more reserved (Japan, the Middle East, some parts of Europe) the same hug or kiss would often be interpreted as inappropriate, too familiar, rude, or even threatening.

Another example is the common body language of holding hands. In the United States, it is interpreted as a sign of intimacy and couple status between two people, or protection and guidance between an adult and a child. Take a walk in Japan or Saudi Arabia, though, and holding hands is interpreted as a sign of friendship between two women but a sign of promiscuity and even vulgarity between a man and a woman.

Another gesture with vastly different interpretations is called the ring gesture. It is formed by touching the tips of your thumb and index finger to form a circle and extending the rest of your fingers outward. In France, it means you think someone is worthless, but in Japan, it means you’re referring to money.

Why do Differences in Interpretation Matter?

Differences in interpretation of body language matter a great deal because they are integral to interpretation and understanding communication in general. When sender and receiver interpret non-verbal cues differently, the potential for misunderstanding, insult, and other problems grows tremendously.

How Prevalent is Non Verbal Behaviour?
Share Your Story, Join the Discussion or Seek Advice..
Hello, I'm doing a research project about body language. Now I'm looking for information about how to interpret body language in diferent situations: in your daily life(I can take information of this page), In your job, with boss and mates, In interviews, In seduction and with kids. I want to know if I can find all this information in this website. Thank you so much, and sorry if my english is not correct. Lidia
LidiaG - 1-Sep-11 @ 11:00 AM
Title:
(never shown)
Firstname:
(never shown)
Surname:
(never shown)
Email:
(never shown)
Nickname:
(shown)
Comment:
Validate: