Newborns and Infants and Body Language 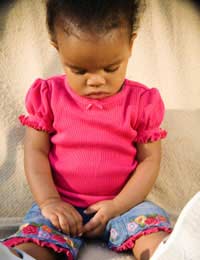 Newborns and infants have quite advanced skills when it comes to sending and receiving messages via body language. It’s a good thing, too, since they won’t develop actual speech for a couple of years or so. Parents are also skilled sending and receiving body language messages with their newborns and infants, although most parents do so quite unconsciously.

The Body Language of Babies

Babies are born with an innate knowledge of body language, both their own and their parents’ non-verbal cues. Nature has pre-programmed them, it seems, to recognise and respond to a wide array of messages.

A newborn baby cannot see more than just a few inches away, but has the ability to recognise the human face right from the start. Parents play right into this ability by leaning in very close to their newborns, talking and smiling all the while.

A newborn’s attraction to human faces is thought to be an important part of the mother and child bonding process. When a baby is breastfeeding, its mother’s face is just within range of its visual area, making it an ideal time for the two to bond. Fathers can use the same bonding process through play, cuddling, or even when bottle-feeding.

Over time, a baby learns even more about body language and non-verbal cues by observing and imitating other people. Adults tend to smile at infants a great deal, which is one reason why one of the first conscious facial expressions learned by a baby is the smile. Other baby body language includes kicking and waving arms to show happiness; turning away from an unpleasant taste; banging on a high chair to get attention; or peering around the coffee table to entice a game of hide and seek.

The Body Language of Parents

Parents seem to have a body language of their own when it comes to their newborns and infants. They use dramatic facial expressions, soft cooing, gentle rocking, and a great deal of touching to communicate with a baby. Smiling, clapping, and encouraging a baby to do something plays a big role in the development of new skills such as smiling, rolling over, sitting up, crawling, and the like.

Once a baby starts crawling and getting into things, a parent’s body language helps guide and discipline the explorations when necessary. A stern look, a shake of the head, even a wag of the finger, all tells a baby when the parent is displeased. On the other hand, nodding the head, holding arms outstretched, clapping, smiling, and the like all tell a baby when the parent is happy and encouraging.

Even the process of learning to eat soft foods is influenced by a parent’s body language. If you’ve ever watched an adult feeding a baby food for the first few times you probably saw the adult opening and closing his or her mouth, demonstrating what the baby should do. Some parents even make chewing and swallowing motions, either unconsciously or consciously.So how important is body language to newborns and infants?

Body language is extremely important to newborns and infants because it is their primary method of communication, both sending and receiving messages. Parents and adults in general can greatly improve their ability to bond and interact with a baby by increasing their understanding and awareness of the non-verbal cues most noticeable to an infant.

What’s more, research shows that the more an infant interacts with parents and other adults right from the beginning, the better and faster that infant develops a whole range of skills such as speech, comprehension, and the like. It’s clear, then, that one of the very best things parents can do with and for their baby is to make the most of sending and receiving body language messages.

The Language of Toddlers and Pre-Schoolers

The Body Language of Your Teenager

Body Language And Parenting
Share Your Story, Join the Discussion or Seek Advice..
Hi i was wondering if you could explain to me how the children in my classe aged 14 monthe to 2.5 years understand me from very early when i speak to them english which is a language most have never heard since I live and work in Greece and most have only been exposed from birth to greek
Tina - 23-Jul-17 @ 9:54 AM
Title:
(never shown)
Firstname:
(never shown)
Surname:
(never shown)
Email:
(never shown)
Nickname:
(shown)
Comment:
Validate: